When I was writing The Duchess, Her Maid, The Groom & Their Lover

, I was doing a lot of my worldbuilding on the spot, whenever I felt something was needed. 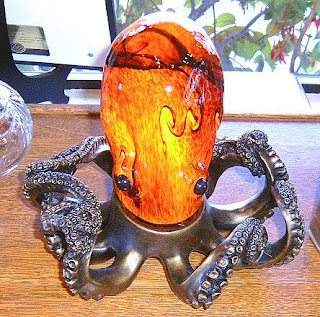 I do think about aspects of the world before I begin writing, but probably just as much comes along in the middle, or during revisions, when I suddenly realize, “I never described this room, and that would set the scene better.”

If I’m in a hurry, or just can’t decide how to “dress” a room, I sometimes use the internet to find items I think would be appropriate for my setting and story. I use the pictures I find to inspire me and decide how to describe the often-vague images in my mind. The octopus lamp that illustrates this post is one such. I’d already decided I wanted octopuses to be a theme of Maxime’s duchy, and had planned to give the decor a mingled Mediterranean/Asian feel. This lamp gave me the idea to have oil lamps as described below. Sea creatures of other kinds would also be popular there, as the duchy’s economics depend on its port. In addition, I wanted to give the duchy’s aesthetics an Art Nouveau feel, for two reasons. I like that aesthetic; and decor can subtly show how this duchy is different from the oppressive duchy shown earlier.

Camille’s palace furnishings are shown as heavier and more medieval in style, mixed with eighteenth-century French decor, that I intended to hark back to Louis XIV and the French revolution. Sometimes I was even more explicit: …the corridor of red marble was lit by yellow beeswax candles, sweet-smelling and thick as his forearm, in gold sconces shaped as unearthly smooth disembodied feminine hands, braceleted in cruel red stones. I actually saw a picture of a lamp in the shape of a woman’s hand, though it wasn’t as disturbing as the sconces I wrote about! I looked at a whole variety of pictures of medieval and Renaissance beds.

All of my ideas about the various duchies, plus looking at images online, yielded these descriptive passages for the scenes set in Maxime’s duchy:

[Henri] entered the room, which flickered with oil lamps behind colored glass, red and gold and sunset orange. On a second look, he saw the glass had been blown into the shapes of bulbous octopuses with bronze tentacles and bright bubbles encircled by bronze dolphins.

He’d left his red and black lacquered portable writing desk on a bamboo stand nearby.

She strolled with Captain Leung…up a short staircase to a tower room filled with padded divans in shades of cream and buttery yellow, bamboo tea tables, and potted plants, some large enough to be called small trees, others draping vinelike from the walls and ceiling.

Luckily for me, I’m using some of the same settings for The Duke & the Pirate Queen

; that saved me a little effort when I had scenes taking place in Maxime’s ducal palace.

Victoria Janssen [she, her] currently writes cozy space opera for Kalikoi. The novella series A Place of Refuge begins with Finding Refuge: Telepathic warrior Talia Avi, genius engineer Miki Boudreaux, and augmented soldier Faigin Balfour fought the fascist Federated Colonies for ten years, following the charismatic dissenter Jon Churchill. Then Jon disappeared, Talia was thought dead, and Miki and Faigin struggled to take Jon’s place and stay alive. When the FC is unexpectedly upended, Talia is reunited with her friends and they are given sanctuary on the enigmatic planet Refuge. The trio of former guerillas strive to recover from lifetimes of trauma, build new lives on a planet with endless horizons, and forge tender new connections with each other.
View all posts by Victoria Janssen →
This entry was posted in the duchess, writing craft. Bookmark the permalink.