I recently heard about an article which talked about paragraphing in terms of anchoring and hooking. I didn’t find the article, but this is how I would use those terms.

At the beginning of a scene, even if you haven’t shifted locations or times, you have to set that scene in the first sentence or paragraph. Think of it like an establishing shot in a movie. The camera shows the place, lighting which indicates whether it’s day or night, who’s in the room. Clutching his greatcoat around him against the November chill, Weston weaved his way among wagons with chocked wheels, tents, campfires, pitiful attempts at vegetable gardens, coppers of boiling water. 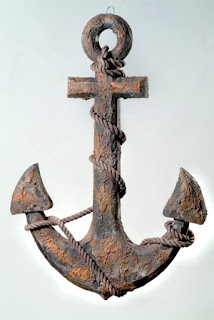 Or Three weeks later, Imena straightened her embroidered turquoise dress coat and brushed off the matching silk trousers as she emerged onto the deck of her ship, Seaflower. It’s okay to just say “Three weeks later” and tell the reader Imena is on her ship.

You can also anchor a paragraph with an opening sentence that’s a little hook if that works: Imena wasn’t able to enjoy her soak in the baths. Well, why not?

Hooking is, basically, ending a sentence or paragraph or scene with a mystery. The “mystery” can be something that’s a tiny bit confusing to the reader, but just enough so to make them want to know more. A contradiction of some kind also works. I don’t go out of my way to do this for every paragraph; sometimes it’s best to just end the paragraph in an organized way, so you can go on with the scene:

She stormed into her cabin and swiftly divested herself of her turquoise finery, tossing it onto her wide bunk.

A more traditional hook to end a paragraph and make the reader want to keep reading might be: The gentle sway beneath his feet was not a ship docked, or even a ship at anchor, but one in motion, fleeing before the wind and propelled by a good tide.

Finally, you have to consider prose rhythm. Sometimes you need a paragraph or scene to end with finality, to emphasize or to make the reader stop and think: She wasn’t his, much as he wished she could be.

2 Responses to Hooks and Anchors