The cover of The Moonlight Mistress is featured on Naked Romance this week, with some of my thoughts on it as well.

Friday was my busiest day. I attended the awards lunch and cheered for the Librarian of the Year Jennifer Lohmann and for the Veritas Award recipient, Gwenda Bond. I then spent some quality time in the bar with Gwenda; her husband, writer Christopher Rowe; and YA author Diana Peterfreund. We talked genre and book covers and markets. It was nice to be back in the science fiction/fantasy world for a little while; I’m more at home there than in romance, because I’ve “lived” there longer.

In late afternoon, I attended a reception for Harlequin’s Single Title authors and finally got to meet one of the Mira staff who’d been exceedingly helpful to me for a long time. I also met Susan Anderson briefly, as well as Courtney Milan (it took me a little while to realize we’d never met in person, only online!) and Kathryn Smith, and got to see Victoria Dahl for the first time at the conference. And a bunch of other people as well. 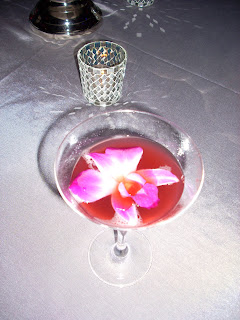 I then returned to my room to dress for that evening’s big bash, the Harlequin Party at the Waldorf Astoria. On the right you will see the signature cocktail of the evening, the “Harleqin Heartbreaker,” or rather what’s left of one!

The space this year was much smaller than usual, but the dancing was just as enthusiastic; they’ve had the same DJ for all three years I’ve been attending, and he really knows how to get people out (“It’s Raining Men,” for example, is popular for more than one reason). I danced, took photos, and ate pretty sugary things including ice cream lollipops and caramel apple and lemon ice. Below is a section of the pretty, pretty chocolate log, decorated with candy leaves and insects. 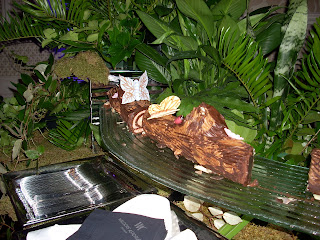 All parties must eventually end, and a group of us left after midnight, trudging out behind a group including Nora Roberts. For the record, we did not steal their cab. They had a limo waiting.

Back in my room, I realized belatedly that I needed to take off my eye makeup again (it was different from what I’d worn earlier in the day). But I was good and did that. Then I slept. Packing could wait until the morning.

I was really glad to get home on Saturday night. I spent all of Sunday lolling about reading and napping. I’ll be ready for next year…in about eleven months or so.