Living in the Future

I have purchased a Kindle! My first surprise, when I announced my purchase of an e-reader on Twitter, was how many people immediately demanded details. So I guess others have been pondering which e-reader, if any at all, just as much as I have. 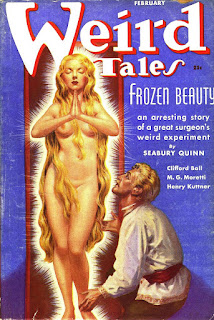 My decision was based on a whole string of factors including reviews, personal discussions, and, umm, me having a gift certificate.

Before the actual device arrived, I was tickled to learn I could add content while it was in transit. So I bought a few books I’d wishlisted, samples of others, and then started looking at what was available for free download.

I don’t know yet how good the formatting is on all of those free books, but I was very pleased to find that a number of classics on my personal TBR were available for free, and I won’t have to check out large musty tomes from the library. We’ll see if that makes me go through my “classics” TBR faster, or not. At least I’m one step closer to finally reading some Wilkie Collins (The Moonstone

and The Woman in White

), and Mary Shelley’s The Last Man

I will defintiely share more of my experiences with the Kindle once I actually have it in hand. ETA: It arrived late yesterday.

Victoria Janssen [she, her] currently writes cozy space opera for Kalikoi. The novella series A Place of Refuge begins with Finding Refuge: Telepathic warrior Talia Avi, genius engineer Miki Boudreaux, and augmented soldier Faigin Balfour fought the fascist Federated Colonies for ten years, following the charismatic dissenter Jon Churchill. Then Jon disappeared, Talia was thought dead, and Miki and Faigin struggled to take Jon’s place and stay alive. When the FC is unexpectedly upended, Talia is reunited with her friends and they are given sanctuary on the enigmatic planet Refuge. The trio of former guerillas strive to recover from lifetimes of trauma, build new lives on a planet with endless horizons, and forge tender new connections with each other.
View all posts by Victoria Janssen →
This entry was posted in business of writing, kindle. Bookmark the permalink.

1 Response to Living in the Future