I would love to see vampire heroes and heroines who are more vulnerable, even, than ordinary humans. I know most readers don’t want to see that, but I do. Vulnerability is what draws me to a character. I want them to be in trouble so I can become involved as they struggle to get out of trouble. 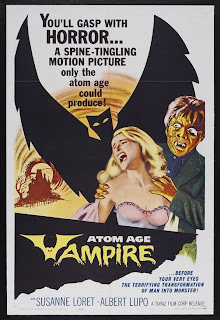 The vampire novels I enjoy aren’t any different. If the vampire is all-powerful, I can’t get interested in him or her as a protagonist. A protagonist without flaw is…not a protagonist, not the way I think about it.

It’s easy enough to include vampire vulnerabilities such as sunlight burning them, deathlike sleep during the day, or susceptibility to yummy buttered garlic bread. Being able to subsist only on blood is an exceptionally good one–all the best vampire books have the vampire in danger of starving unless fed willingly by his or her unwilling best friend or random stranger. (Like that scene in a Buffy the Vampire Slayer episode in which Buffy has to offer her blood to Angel so he won’t die from poison.)

I don’t think it’s enough to just mention those vulnerabilities. I think, as a writer, you have to show them, and their effects. As a reader, knowing the vulnerability exists is one thing; experiencing it through the character is much more vivid.

And I think that, whatever magical physical weaknesses the vampire character has, they should be matched by emotional weaknesses. Emotional weaknesses are what we, as humans, can really understand. The vampire who hates what he is, or can’t resist drinking from his beloved even though it leads to future doom, or merely gets depressed because he’s outlived all his friends–that’s the vampire I want to read about.

Victoria Janssen [she, her] currently writes cozy space opera for Kalikoi. The novella series A Place of Refuge begins with Finding Refuge: Telepathic warrior Talia Avi, genius engineer Miki Boudreaux, and augmented soldier Faigin Balfour fought the fascist Federated Colonies for ten years, following the charismatic dissenter Jon Churchill. Then Jon disappeared, Talia was thought dead, and Miki and Faigin struggled to take Jon’s place and stay alive. When the FC is unexpectedly upended, Talia is reunited with her friends and they are given sanctuary on the enigmatic planet Refuge. The trio of former guerillas strive to recover from lifetimes of trauma, build new lives on a planet with endless horizons, and forge tender new connections with each other.
View all posts by Victoria Janssen →
This entry was posted in reading, sf/f, vampires, writing craft. Bookmark the permalink.