Decoration Day, renamed Memorial Day beginning in 1882, was first celebrated in the United States following the Civil War; it commemorates U.S. men and women who died while in the military. One of the most famous parts of Memorial Day, however, arose during World War One. 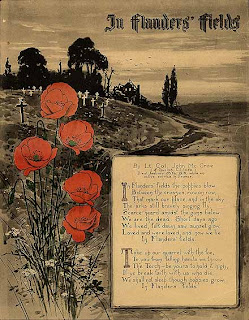 The practice of red poppies on Memorial Day originated in 1918 with Moina Michael, who was inspired by Canadian John McCrae’s famous poem, “In Flanders Fields” (1915). The tradition spread from the United States to France via Anne Guerin, who poineered the selling of poppies, real or facsimile, as a way to raise money for various causes to benefit veterans and the victims of war. Through her advocacy, the sale of poppies for charitable causes spread to The United Kingdom, Canada, New Zealand and Australia.

White poppies are sometimes worn in this context, and symbolize looking forward to peace, rather than back at sacrifice.

Victoria Janssen [she, her] currently writes cozy space opera for Kalikoi. The novella series A Place of Refuge begins with Finding Refuge: Telepathic warrior Talia Avi, genius engineer Miki Boudreaux, and augmented soldier Faigin Balfour fought the fascist Federated Colonies for ten years, following the charismatic dissenter Jon Churchill. Then Jon disappeared, Talia was thought dead, and Miki and Faigin struggled to take Jon’s place and stay alive. When the FC is unexpectedly upended, Talia is reunited with her friends and they are given sanctuary on the enigmatic planet Refuge. The trio of former guerillas strive to recover from lifetimes of trauma, build new lives on a planet with endless horizons, and forge tender new connections with each other.
View all posts by Victoria Janssen →
This entry was posted in holiday, research, wwi. Bookmark the permalink.

2 Responses to Wherefore the Poppy?