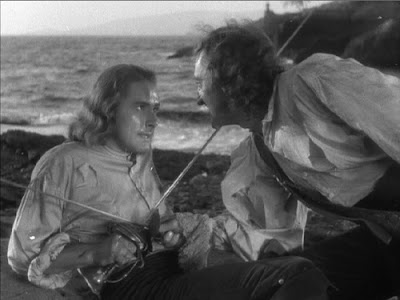 Sometimes, a picture says it all.

Photo is of Errol Flynn and Basil Rathbone in Captain Blood, 1935. You can see the sword fight here. It’s visible that Basil Rathbone was a real fencer; Errol Flynn said, “I really can’t fence worth a damn. I just know how to make it look good.”

Regardless, it’s very unlikely sailors of that period would fence as those two did in the movie–the edged weapon of choice for sailors of the 17th and 18th centuries was the cutlass, a slashing weapon that required little training and was excellent for use in close quarters fighting. The cutlass is both shorter and heavier than, for example, the saber, which was often used by cavalry. Cutlass blades were sometimes straight, sometimes slightly curved, and sharpened on only one edge. Often, the hilt (and the wielder’s hand) was protected by a curved or basket-shaped guard.

Tomorrow, Kirstin Saell will guestblog on “Writing F/F(/M) for the Female Gaze.”

Victoria Janssen [she, her] currently writes cozy space opera for Kalikoi. The novella series A Place of Refuge begins with Finding Refuge: Telepathic warrior Talia Avi, genius engineer Miki Boudreaux, and augmented soldier Faigin Balfour fought the fascist Federated Colonies for ten years, following the charismatic dissenter Jon Churchill. Then Jon disappeared, Talia was thought dead, and Miki and Faigin struggled to take Jon’s place and stay alive. When the FC is unexpectedly upended, Talia is reunited with her friends and they are given sanctuary on the enigmatic planet Refuge. The trio of former guerillas strive to recover from lifetimes of trauma, build new lives on a planet with endless horizons, and forge tender new connections with each other.
View all posts by Victoria Janssen →
This entry was posted in images, pirates, research. Bookmark the permalink.

2 Responses to Pirates and Swords