Everyone should read the Temeraire books.

Just in case you haven’t read Naomi Novik’s Temeraire series yet, I’m going to tell you why you should. And the chief reason to do so is not “because you don’t have enough books already.” 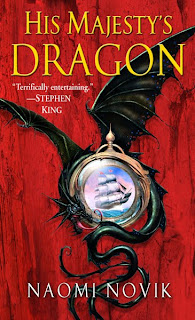 Temeraire is a dragon. With his captain, William Laurence, and a vast number of other dragons, he serves the king of England in fighting Napoleon. The prose and style and tone are very Jane Austen, and there are all sorts of nifty extrapolations of what society would be like in Napoleonic-era Europe if there were dragon airforces. The best part to me, though, is the romance. Well, it isn’t really a romance – it’s more of a bromance – anyway, the loving relationship between Laurence and Temeraire is golden. Golden, I tell you. His Majesty’s Dragon

is the first in the series. Excerpt.

One of the things I love best about this series is that it can be read on several different levels. There are the adventure plots, in which the heroes defend their country against invaders, or journey to faraway lands (China in Book 2, Throne of Jade

, and Africa in Book 4, Empire of Ivory

The novels explore moral and philosophical issues resulting from a culture of humans who enslaves non-human intelligent beings and uses them for political ends, and what happens when the dragons begin to become aware of this. For instance, “…it was no conscious malice: only the common unthinking assumption by which men treated dragons as inconvenient if elevated livestock, to be managed and herded without consideration for their own sentiments; an assumption so engrained that Laurence had recognized it as outrageous only when forced to do so by the marked contrast with the conditions he had observed in China, where dragons were received as full members of society, (Empire of Ivory).” 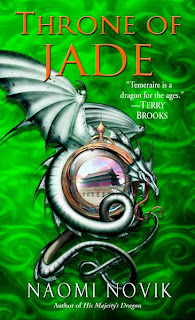 Temeraire’s point of view is beautifully imagined–vastly intelligent but often naive, and also alien, because a dragon’s goals are not a human’s goals. Laurence’s point of view is perhaps more familiar; he’s strongly honorable and emotionally constrained, and doing his best to maneuver a life worlds different than the naval career he’d expected. And did I mention the man/dragon bromance?

This series just keeps getting better and better, each one more complex than the last. You should go read them now. When I finished the most recent one, I closed the book and, involuntarily, caressed the cover. (Our relationship is Pure, though. Pure!)

Victoria Janssen [she, her] currently writes cozy space opera for Kalikoi. The novella series A Place of Refuge begins with Finding Refuge: Telepathic warrior Talia Avi, genius engineer Miki Boudreaux, and augmented soldier Faigin Balfour fought the fascist Federated Colonies for ten years, following the charismatic dissenter Jon Churchill. Then Jon disappeared, Talia was thought dead, and Miki and Faigin struggled to take Jon’s place and stay alive. When the FC is unexpectedly upended, Talia is reunited with her friends and they are given sanctuary on the enigmatic planet Refuge. The trio of former guerillas strive to recover from lifetimes of trauma, build new lives on a planet with endless horizons, and forge tender new connections with each other.
View all posts by Victoria Janssen →
This entry was posted in historical fiction, reading, recommendations, sf/f. Bookmark the permalink.

2 Responses to Everyone should read the Temeraire books.