Either way, category romance novels are the spine of the Romance industry. It’s so part of the industry that it doesn’t get the respect it truly deserves. It’s cheap. Readily available. Quick injection of escapism. As well as all other things that can make romance readers take category romances for granted. And above of all, it’s a lottery.

You never really know what you may get when you pick up a category romance. Will it be another tale of cookie-cutter characters, much-peddled-and-tired old story line, and insane fillers that makes you want to bang your head against a wall, wondering why you spent money on something wasteful?

Or will it make you sit quietly after it ended, musing about how much you enjoy being a romance reader? Or how much you appreciate authors who do their best to create memorable stories, though the sheer number of category romances produced makes it so easy for an author to knock up a generic story to fulfil their publisher’s monthly supply rota for some quick cash?

These authors are the reason why I keep reading category romance novels. It’s them that make me endure the craziness of the lottery. And whoo hoo! I was a lottery winner a few times. Here are some of my favourite winnings that left an impact on me, particularly during my formative years as a romance reader.

Taken captive in the middle of a conspiracy of international proportions, wealthy socialite Jane Hamilton Greer is rescued by government agent Grant Sullivan, who finds his mission complicated by his feelings for Jane.

When readers think of Linda Howard as a category romance author, they think of Mackenzie’s Mountain, Diamond Bay or Sarah’s Child. For me, it’s Midnight Rainbow because it’s solely responsible for giving birth to my love for adventure romance novels.

I hadn’t heard of Linda Howard when I spotted the eye-catching cover of this book in a library. I cracked it open, thinking it would be a typical “do-you-love-me?” man of war, but instead, it was an awesome ride through a jungle to get away from the baddies. Jane blew my fifteen-year-old mind away with her quick wit, practical attitude, ability to adapt, and refusal to take it lying down. Grant? He – as I discovered later after glomming Linda Howard’s other category romances and single titles – is a typical Linda Howard hero: a tough-bastard Alpha, but at least here, Jane and Grant gave each other as good as they can give. I found this a refreshing change from other category romances where heroines’ lips would quiver as their eyes fill with unshed tears while heroes add another notch to their chins to illustrate the height of their pride.

Readers who enjoy devouring the slow-building romantic tension won’t like this, though. It’s a fast-paced adventure romantic yarn with a couple of steamy scenes. If you enjoy the film Romancing the Stone, you will like Midnight Rainbow. I’ll always love Midnight Rainbow because it had me tracking down similar stories, such as Laura Leone’s Fever Dreams, McReynolds’s River of Eden and Anne Stuart’s The Soldier and the Baby, which led me to read historical romances with similar premises, such as Connie Brockway’s As You Desire.

I spent ages trying to decide which Anne Stuart title should be chosen for this editorial. She’s written roughly 40 category romances and about 80% of them were enjoyable. I should pick The Soldier and the Baby because it was my first Anne Stuart book, but I choose One More Valentine because it is so different.

James Rafferty, the hero, is a Chicago gangster who was killed in the St. Valentine’s Day Massacre on 14th February in 1938. Every year since that day, Jamey and his gang return to life for forty-eight hours from 13th February until the moment of their death. If they meet women with whom they truly fall in love during the forty-eight hour period, they can step out of the cycle to live and die naturally with the women they love. Jamey hasn’t fallen in love yet, because he hasn’t yet met Helen Emerson, a world-weary associate District Attorney, whose life is in danger.

My other Anne Stuart category romance favourites are Cinderman (mostly for the WTF? factor – the scientist hero somehow manages to make himself invisible), Special Gifts (a psychic heroine + a police detective + a murder = better than it sounds), Falling Angel (the hero is dead, but he has a chance to redeem himself by righting the wrongs he made when he was alive), and The Soldier and the Baby (don’t let the title deceive you into thinking it’s a secret baby book because it isn’t. It’s not anything you may expect. The heroine is a novice nun, for instance. A nun with a tendency to roll eyes at stupidity + a newborn baby + a seasoned former soldier with a tendency to make an arse of himself + a dangerous area somewhere in Central America? Whoo hoo! Yup, it’s an adventure romance.)

It’s a tale of two people who own rival bike messenger companies. Sam Leong is a happy-go-lucky, reckless type. Bree Jeffries is a cautious, level-headed and cool cucumber. Never the twain meets, until they collide with their messenger bicycles.

I seriously doubt this one could stand the test of time as it was written during the 1980s even though I read it during mid-1990s, but it has a special place in my heart because of how it shook my fourteen-year-old world. It was the first time I came across a heroine who was actually Eurasian. And it was the first time I’d read a category romance novel that featured both heroine and hero having a Chinese ancestry. I did come across a Chinese heroine once before, in a Karen Keast book, but the hero was almost always Caucasian, which was why this couple came as a shock.

Embarrassingly, the book cover clearly shows what they look like, but I just wasn’t observant. I was so used to having Caucasian characters in category romance novels that I didn’t bother taking a close look at the cover. All I saw was a mature dude in an old-man suit and a woman in skimpy sporty clothes. I no longer have a copy of this book and I don’t think I want to re-read it as I suspect it’s badly dated, but it’ll always have a soft spot in my heart.

After All These Years – Kathleen Gilles Seidel (Harlequin American Romance, no. 2) 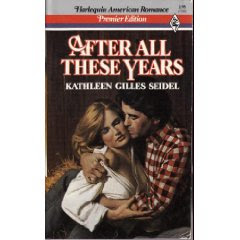 Have you ever had a book that basically stuck its hand into your stomach and after churling it, ripped it out? After All These Years did that to me because I hadn’t come across anything like it. It’s a tale of ordinary people grappling with ordinary issues and the complexity of falling in love. In this case it’s a tale that explores the saying, three’s a crowd. Only in this, one of them is dead.

Although I have since fallen in love with one of her books I found later, Till The Stars Fall, After All These Years richly deserves to be re-issued. It would be nice if Seidel could revise it a bit to update some dated aspects (clothes, for instance), but if she couldn’t, it still needs to be reissued. It’s worth reading for those who love character-driven romances.

This was my introduction to Theresa Weir’s works including Cool Shade, Amazon Lily, One Fine Day, Some Kind of Magic (my personal favourite), and All Night Long.

I didn’t summarise Loving Jenny because trust me, it’s better to go in without knowing anything other than it’s a quiet romantic tale of a man who attempts to break through an enigmatic woman’s wall of defence and somehow ends up finding a sense of fulfilment through her that he didn’t know he’d been missing.

I can’t quite articulate how I feel about Loving Jenny. It’s a simple story that deals with amazingly complex issues. When I began reading this book, I thought I had found Sandra Canfield’s successor, but Weir took it much further in her own way. Those who enjoy small-town romances or the works of Marilyn Pappano and Sandra Canfield will enjoy this.

Weir has another category I truly enjoyed: Iguana Bay, which is criminally ignored by many romance readers. It’s a tale of intrigue and adventure. If you enjoyed Linda Howard’s Diamond Bay, you will like Iguana Bay.

Thanks so much, McVane! Especially since some of those author names are unfamiliar to me, but not for long. Now I have to go and hunt these up.

And that’s it’s for my “Exploring Category Romance” Week, or rather a bit-over-a-week. You can view the whole set of posts using the category tag.

Victoria Janssen [she, her] currently writes cozy space opera for Kalikoi. The novella series A Place of Refuge begins with Finding Refuge: Telepathic warrior Talia Avi, genius engineer Miki Boudreaux, and augmented soldier Faigin Balfour fought the fascist Federated Colonies for ten years, following the charismatic dissenter Jon Churchill. Then Jon disappeared, Talia was thought dead, and Miki and Faigin struggled to take Jon’s place and stay alive. When the FC is unexpectedly upended, Talia is reunited with her friends and they are given sanctuary on the enigmatic planet Refuge. The trio of former guerillas strive to recover from lifetimes of trauma, build new lives on a planet with endless horizons, and forge tender new connections with each other.
View all posts by Victoria Janssen →
This entry was posted in category, guest, reading, recommendations, romance novels. Bookmark the permalink.