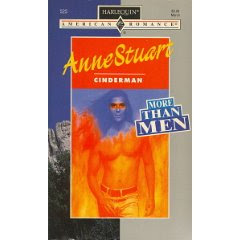 Category romances, contrary to many peoples’ beliefs, are not at all the same. Sometimes, they push boundaries.

I have not yet read Mallory Rush’s Kiss of the Beast, a Harlequin Temptation that features an alien hero (the only alien hero I’ve heard of in a category), but it looks very interesting, and was recommended to me twice.

In Judith Arnold’s Barefoot in the Grass (1996), the heroine is a survivor of breast cancer who has had a mastectomy. It’s surprising to me how rare that is in contemporary romance. Arnold is also the author of Sweet Light (1992), whose heroine is Jewish, surprisingly uncommon in category romance, even today.

The ultimate example of stretching boundaries, to me, is Cinderman by Anne Stuart. It was published as a Harlequin American Romance, a line currently described as “lively stories about homes, families and communities like the one you know.” Cinderman is like that. Assuming, that is, that your community includes people who get doused in weird slime and subsequently develop amazing super-powers.

It is so awesome. Anne Stuart’s books often take risks and bend genre, so this book is only surprising because it was published as a category, in a line that didn’t include paranormal elements at all; also, it was published in 1994, long before the current boom in paranormal and urban fantasy novels. So far as I’ve been able to determine, it was the first “superhero” romance. And I mustn’t omit mentioning that as well as being ground-breaking, it’s a really funny book. There’s a lot of witty dialogue between hero and heroine, and the heroine’s t-shirts become a running gag that just gets funnier and funnier.

Here’s a detailed review at All About Romance.

What’s the most unusual category romance you’ve ever read?

2009 Year of the Category Reading Challenge at Lurv A La Mode.

Victoria Janssen [she, her] currently writes cozy space opera for Kalikoi. The novella series A Place of Refuge begins with Finding Refuge: Telepathic warrior Talia Avi, genius engineer Miki Boudreaux, and augmented soldier Faigin Balfour fought the fascist Federated Colonies for ten years, following the charismatic dissenter Jon Churchill. Then Jon disappeared, Talia was thought dead, and Miki and Faigin struggled to take Jon’s place and stay alive. When the FC is unexpectedly upended, Talia is reunited with her friends and they are given sanctuary on the enigmatic planet Refuge. The trio of former guerillas strive to recover from lifetimes of trauma, build new lives on a planet with endless horizons, and forge tender new connections with each other.
View all posts by Victoria Janssen →
This entry was posted in category, reading, romance novels, sf/f. Bookmark the permalink.