I was a bit overwhelmed for a few moments when I first stepped into the Javits, but soon realized that Book People were all around me. I keep thinking I recognize people whom I’ve never seen before, because they have that aura of Book about them! 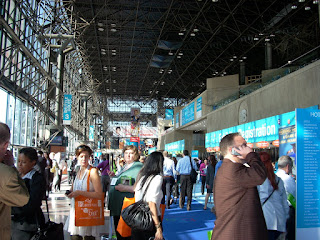 I visited the RWA booth and also Harlequin’s booth, delivered some free chocolate I’d brought for the booth staff, snapped a bunch of photos of the large crowds of people, and then, purely by chance, ran into a Twitter friend, whom I’d never met in person before. Much wandering ensued, including me refusing many free books, tote bags, chapsticks, flyers…everything, in fact, since I didn’t want to carry anything around, and I figured the freebies would serve a better purpose going to booksellers and librarians, anyway. I did get a free comic from the Image Comics booth. 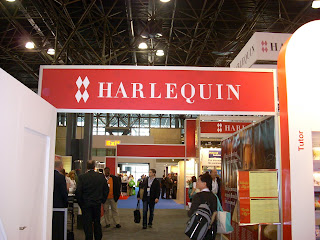 So far, I’ve run into writer friends Christine Merrill, Sarah Beth Durst (actually, Sarah found me!), Laura Anne Gilman, and briefly, Holly Black. I am debating attending a Harlequin party tonight. It’s offsite, and I suspect I will be too tired and overstimulated to really enjoy myself.

I did hand out a few of my cover flats for The Duke and the Pirate Queen. I have to remember I’m carrying them! Hopefully, I’ll do better with that this afternoon, now that I have a better feel for the show and where things are.