Thank you, Vickie, for inviting me to be your guest. I’m thrilled to be here, even if only virtually.

I know readers and aspiring authors like to hear how published authors got started. (I know this because I’ve been both! Yes, and I’m still a reader.) I’m happy to tell you my (semi-goofy) story. 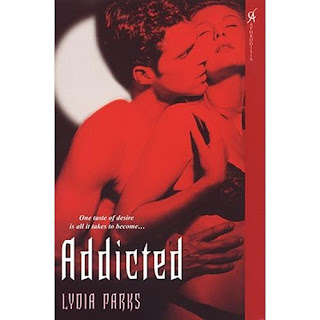 I didn’t start out to be a writer. Actually, I’m an engineer. One fateful night, I sat down to watch television–it was a cold winter night in Alaska, so it seemed like the thing to do–and I caught the first episode of “Forever Knight.” Yow! Talk about a show before its time! I was a fan of Anne Rice’s Interview with the Vampire, and this show was created just for me. It had all the sexual conflict and darkness with a cast of wonderful Canadian actors. I was hooked. Big time.

This happened in 1992 when the Internet was a new thing. My DH was one of the first people I knew who managed to hook in. As the Net grew, I discovered a group writing fanfiction for Forever Knight (stories that use the show’s characters–the “episodes that were never filmed” concept). I jumped in and started writing. We all shared our stories with others online we’d never meet (or so we thought, but that comes later). When the show was cancelled after three seasons and most of the characters killed off, we all went into mourning. Then a couple dozen of us got together and wrote “Season 4.” It was a blast, and I was picked to write an episode. I can’t remember the name of it at the moment…maybe it’ll come to me. Anyway, each “author” was assigned an editor, and mine turned out to be a real editor from New York. Once we’d finished the episode, she suggested I write a romance novel, so I did. I wish I knew who that editor was. I’d like to thank her.

There’s more to the story–hours of heartache, a hundred or so “dear author” rejection letters, the long, hard road of learning to write a novel, the excitement of selling, etc.–but I won’t go into all the details. I managed to sell some romance novels and a couple of mysteries, and then was asked to try my hand at erotica. “Erotica?” I thought. Hmm. Hot sex, dark alpha characters…vampires! Of course! So I started with the Nathan Cotton series (published by eXtasy Books), then sold some hot, juicy vampires to Aphrodisia (Addicted and Devour Me). I also have a vampire in a Nocturne Bite (“Shadow Lover”) from Silhouette. 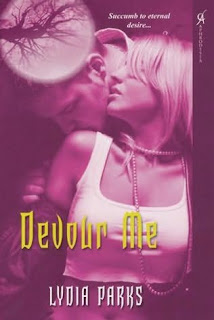 Maybe because of where I started, I’m a semi-purist when it comes to vampires. I’m not into the Nosferatu kind of vampires, all warty and pointy-eared, but definitely the Nick Knight version. My vampires can’t go out in the sun and they aren’t part-anything-else. A stake through the heart definitely does them in. And most of them can’t stand garlic. They exist in the normal world, not a fantasy place filled with other super-naturals. One thing they all want is human blood, and it’s always a very sexual experience for both vamps and humans when they take it. I just love the angst-ridden vampire image, even if he isn’t always full of angst. It’s all about the Hunger.

My latest story out from Nocturne Bites, “Marked” – which is available right now on eHarlequin.com – isn’t about a vampire, but a shape-shifter. It’s set in New Mexico and has a Native American flavor (thanks to a good friend who agreed to be my advisor). I really like the story. Maybe because it, too, has the hunger factor. He doesn’t want to drink her blood…he just WANTS HER!

What I’ve realized about vampire (or shape-shifter) erotica is that it’s no different than any other writing. If there’s no conflict, it isn’t interesting for me as either an author or a reader. I’m not saying that reading hot sex isn’t fun, it’s just that I can’t read 200 pages of hot sex without a good story in there, too. Vampires present an automatic element of conflict; he wants her but he might kill her if he gives in to his desires. That’s pretty strong conflict. However, if you can give the conflict a twist, you’ll have a much stronger story. He’s a vampire…if he takes her, he loses his only chance to see the sunlight again…she’s actually a vampire hunter…she thinks he killed her father…get creative! What’s the worst thing that could happen to him? The answer should be “her.” Romance is a great basis for erotica, with or without vampires.

Oh, and I promised you the rest of the story. For my 39th birthday (I’m not telling you how long ago it was, but the photos are fading), I got to meet my favorite vampire: Geraint Wyn Davies who played Nick Knight. What a hunk, and an absolutely fabulous person! A good friend and I went to a crazy weekend event with 80 women and Ger. I must admit, I had a blast, but it was kind of a strange thing to do. Several of us got together to swap stories about what we’d told our friends and family we were spending the weekend doing: business meeting, friend’s wedding, therapy. Too funny. Anyway, I met a bunch of the people I’d been sharing fanfiction with. I even got to sign a few stories–my first autographs! I’ll always remember that weekend more than just a little fondly.

One thing I got from that event was an important lesson: know that the people reading what you’re writing are real, they’re out there somewhere, and you just might meet them! [toothy grin with fangs]

If you want to find out about any of my vamps or other creatures, please visit my website. I love to hear from readers!

Any other fans of television vampires out there? And do they inspire you to write?

This is the first post in a little Vampire Blogging Festival I’m hosting. My upcoming guests include:

Victoria Janssen [she, her] currently writes cozy space opera for Kalikoi. The novella series A Place of Refuge begins with Finding Refuge: Telepathic warrior Talia Avi, genius engineer Miki Boudreaux, and augmented soldier Faigin Balfour fought the fascist Federated Colonies for ten years, following the charismatic dissenter Jon Churchill. Then Jon disappeared, Talia was thought dead, and Miki and Faigin struggled to take Jon’s place and stay alive. When the FC is unexpectedly upended, Talia is reunited with her friends and they are given sanctuary on the enigmatic planet Refuge. The trio of former guerillas strive to recover from lifetimes of trauma, build new lives on a planet with endless horizons, and forge tender new connections with each other.
View all posts by Victoria Janssen →
This entry was posted in erotica, guest, television, vampires. Bookmark the permalink.