Please welcome my guest, one of my favorite writers ever, Suzy McKee Charnas!

Delighted to be invited here — since I’m just fresh off a new vampire story, and, er, “sparkling” with stuff to say! I’ll be be on a panel at the local SF convention this August, Bubonicon, called “Bite Me: when did vampires get sparkly and romantic, and why?” 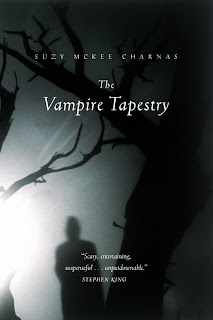 For me as a reader, the vampire has always been not just old (and therefore wise and sophisticated as well as, probably, decadent) but grown up (and male — but that’s another story). If he wasn’t going to be just a well-barbered werewolf in a tux (or some other popular monster, prettied up), then he needed at least some of the qualities of his great popular prototype, Count Dracula. And there was always a strong sexual allure– but it was edgy, not all warm and cuddly, because death — and “worse than death” — was always a strong possibility.

And that’s the way I wrote my own first vampire, Dr. Edward (yes, Edward — I got there first!) Lewis Weyland, in a “cult classic” (whatever that means): The Vampire Tapestry. He’s brilliant, attractive, an occasional (and remorseless) killer, and NOT looking for a soulmate to come live with him forever (like that’s something anybody sane would want — ETERNITY, with someone who’ll eventually be about as sexy to you as your college roommate).

But — the possibility of the romantic angle was always there, too, as it is with all sexy monsters, for very good cultural and psychological reasons (some of you may know this essay). And lately, as sexual activity has become the norm earlier and earlier for modern kids, youth’s romantic idealism (“my one and only true, perfect love”) and sentimentalism (“my lovely puppy that bites, but only to protect his beloved me“) has over-whelmed dangerous old vampire and coated him with fairy-dust. Presto: the sparkly vampires of what sometimes looks to me like our very own cultural Twilight. He’s broody, handsome, not interested in anything or anyone but Me, and he’s in High School.

So, there came along a challenge — to write a vampire story for a collection to be called Teeth (YES, I hope they change the title!) aimed at the Young Adult market and due out next year. The idea is to catch the attention of young readers stuck on Twilight and show them that the greater world of written vampires is wider than Sparkleworld.

I bit. I didn’t know exactly what I was going to do, but it was definitely going to minus the fairy dust.

So I’m visiting a local antiques mall that a friend runs in her “retirement”, and all of a sudden I get it — my story’s setting: my vampires were going to show up at the mall, avid seekers of collectibles among the “trash and treasures” typical of these places; and my late-adolescent hero, Josh, working there for the summer, will have to deal with them, up close and oh-so-personal. 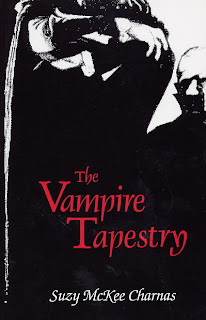 And — well, you’ll have to read the story (“Late Bloomer”) to find out, but I can tell you this much: I loved writing modern vamps who are obsessed not with “Ooohh, oh, me so lonely and angsty” but with a vigorous, fiercely competitive kind of Antiques Roadshow life (well, without the “life” part). The research for this story was wonderful to do — hanging out at the antiques mall people-watching (plus the behind-the-scenes goodies). I also had a great excuse to interview my grandkids (both finishing high school) about music, so that I’d know who this boy would be listening to, and who he’d be desperate to be.

Which, thanks to my stepson giving me an iPod for my last (70th) birthday, has brought me into a whole new world of great music, to listen to while on the treadmill at the gym!

I love vamps; I never come away from writing about them with empty hands. Takers they are by nature, but they also keep on giving — they can’t seem to help themselves.

Thanks, Suzy! I can’t wait to read “Late Bloomer.”

Victoria Janssen [she, her] currently writes cozy space opera for Kalikoi. The novella series A Place of Refuge begins with Finding Refuge: Telepathic warrior Talia Avi, genius engineer Miki Boudreaux, and augmented soldier Faigin Balfour fought the fascist Federated Colonies for ten years, following the charismatic dissenter Jon Churchill. Then Jon disappeared, Talia was thought dead, and Miki and Faigin struggled to take Jon’s place and stay alive. When the FC is unexpectedly upended, Talia is reunited with her friends and they are given sanctuary on the enigmatic planet Refuge. The trio of former guerillas strive to recover from lifetimes of trauma, build new lives on a planet with endless horizons, and forge tender new connections with each other.
View all posts by Victoria Janssen →
This entry was posted in guest, vampires. Bookmark the permalink.