I’m elsewhere today! You can find me talking about my top five favorite Marriage of Convenience novels at Monkey Bear Reviews.

I’m also a guest poster today at the Novelists, Inc. Blog on “Real Writers Have Business Cards?” Please drop by and check it out!

Now please welcome my guest, Voirey Linger, as she chats about the paranormal element of her new novella, Risking Eternity. 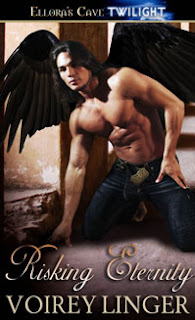 My world building is usually pretty basic. I like to set things in a contemporary setting, a city that can be just about anywhere. I set up the characters in a world I already know. When writing angels, this took me back to my roots as a pastor’s kid.

I grew up in a home that was an odd balance of Christian Fundamentalist and Liberal Christianity. Creation and science were balanced on a fine edge and there was a constant pull between staying rooted in Biblical beliefs and living in a modern world.

When the idea of the angel books came to me, it made perfect sense to throw that same tug-of-war between the conservative values and modern life into the mix.

As part of this balance, I needed to cement the world of an angel, make it as simple and natural as the human world. I dug up all kinds of internet information and read multiple books on secular Angelology, but nothing seemed to fit the natural order of how things worked in my head.

When researching paranormal elements, there are many myths, legends and traditions to draw on for world building. The information I found on angels was vast, varied and often contradictory. On one hand it left me very confused in terms of what was ‘right’ but on the other it gave me the freedom to simply create what I wanted without worrying about being correct.

So I went back to my roots, where I first learned about angels. I went to Christian tradition and the Bible. 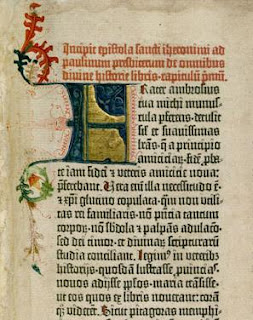 There are areas where I wander a bit, filled in my own imaginings, other places I had to choose between Bible scholars deductions and some of the old traditional beliefs, but that’s to be expected in writing fiction.

In the end I simply chose information fit my storyline as long as I could find something in the Jewish-Christian tradition that supported it. This tradition is wide-spread and at least partially familiar in much of the English-speaking world today. With Risking Eternity, I tried to tap into these deep-seated roots.

My hope is that the result is easy for a reader to assimilate and accept. I want to push a but, suspend disbelief, and never hit a point where the reader has to stop and choose to accept a detail.

Did I succeed? I don’t know. That’s up to the reader to determine.

Victoria Janssen [she, her] currently writes cozy space opera for Kalikoi. The novella series A Place of Refuge begins with Finding Refuge: Telepathic warrior Talia Avi, genius engineer Miki Boudreaux, and augmented soldier Faigin Balfour fought the fascist Federated Colonies for ten years, following the charismatic dissenter Jon Churchill. Then Jon disappeared, Talia was thought dead, and Miki and Faigin struggled to take Jon’s place and stay alive. When the FC is unexpectedly upended, Talia is reunited with her friends and they are given sanctuary on the enigmatic planet Refuge. The trio of former guerillas strive to recover from lifetimes of trauma, build new lives on a planet with endless horizons, and forge tender new connections with each other.
View all posts by Victoria Janssen →
This entry was posted in guest, sf/f. Bookmark the permalink.