Before I wrote The Duke and the Pirate Queen, I didn’t realize quite how many websites existed about pirates, especially pirates from the 1600s through around 1720, particularly in the Caribbean. That’s the most common idea most people have of pirates, based on movies and novels such as Treasure Island. 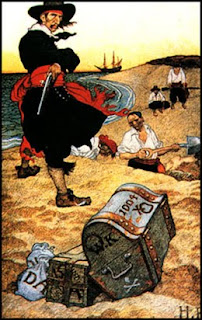 Because I was writing a fantasy, I was able to use a mixture of ideas about “classic” pirates mingled with elements from nineteenth-century naval adventure novels and books about the pirates of Japan. In the course of all that, I found some fun websites.

The Port Royal Archives, which includes research papers, maps, and other documents.

Maritime Museum of the Atlantic in Nova Scotia.

No Quarter Given, the website of a pirate magazine.

The New St. Augustine Pirate & Treasure Museum is set to open in November, 2010.

Victoria Janssen [she, her] currently writes cozy space opera for Kalikoi. The novella series A Place of Refuge begins with Finding Refuge: Telepathic warrior Talia Avi, genius engineer Miki Boudreaux, and augmented soldier Faigin Balfour fought the fascist Federated Colonies for ten years, following the charismatic dissenter Jon Churchill. Then Jon disappeared, Talia was thought dead, and Miki and Faigin struggled to take Jon’s place and stay alive. When the FC is unexpectedly upended, Talia is reunited with her friends and they are given sanctuary on the enigmatic planet Refuge. The trio of former guerillas strive to recover from lifetimes of trauma, build new lives on a planet with endless horizons, and forge tender new connections with each other.
View all posts by Victoria Janssen →
This entry was posted in links, pirates. Bookmark the permalink.