Telepathy and romance are two great tastes that ought to taste great together. So why is it that, so often, a telepathic heroine or hero–finds true love with the one person whose mind can’t be read? 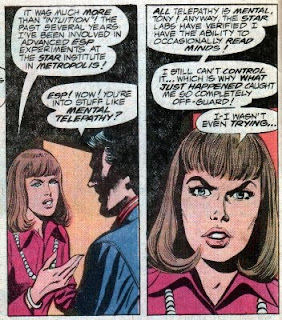 It’s part of a romance novel’s plot, of course, for a couple to get to know each other better. There need to be obstacles in the way. If one person can read the other’s mind, a lot of the tension is gone from the story. If one of the partners is immune to the other’s ability, that creates tension and can also serve as a signal to the telepath that here is someone special.

But what if the telepathy did work? Usually, in those cases the plot tension arises from the non-telepathic character having secrets which the telepath might accidentally–or purposely–uncover. The telepath might learn things that complicate the relationship further. 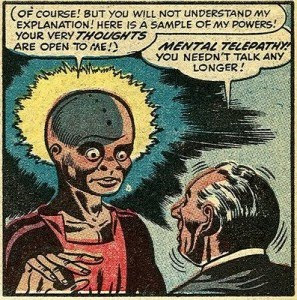 But there’s another way to use telepathy in romance, I think, a way that I’ve seen more often in science fiction or fantasy novels that happen to have a romance. Telepathy can be used as a kind of leveller, a new way of looking at how two people interact. “Normal” humans are isolated from each other in many ways. Their intimacies are negotiated and can never be total as we can’t see another person from the inside. What if they weren’t isolated from each other? What happens then?

If one or both characters can read the mind of the other, most of the simple romantic conflicts can be eliminated. The writer has to delve deeper for plot conflict, perhaps specifically engaging with gender roles in a relationship, or other power differentials. The writer could explore how their characters would interact on another level entirely.

Victoria Janssen [she, her] currently writes cozy space opera for Kalikoi. The novella series A Place of Refuge begins with Finding Refuge: Telepathic warrior Talia Avi, genius engineer Miki Boudreaux, and augmented soldier Faigin Balfour fought the fascist Federated Colonies for ten years, following the charismatic dissenter Jon Churchill. Then Jon disappeared, Talia was thought dead, and Miki and Faigin struggled to take Jon’s place and stay alive. When the FC is unexpectedly upended, Talia is reunited with her friends and they are given sanctuary on the enigmatic planet Refuge. The trio of former guerillas strive to recover from lifetimes of trauma, build new lives on a planet with endless horizons, and forge tender new connections with each other.
View all posts by Victoria Janssen →
This entry was posted in romance novels, sf/f, writing craft. Bookmark the permalink.

6 Responses to Telepathy and Romance