I’m still–yes, still–thinking about getting an e-reader. As part of my decision-making process, I started thinking of why I would choose e-books over print, and vice versa. 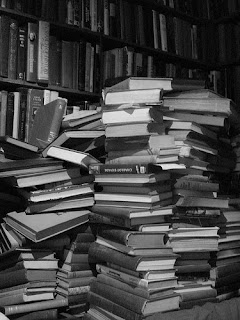 1. A good friend wrote the book. Then I might want the print version, so they could autograph it; particularly if it was their first book, which is special. However…I rarely read short stories, despite having piles of short story collections written by friends, and anthologies in which their stories appear. I recently discovered short stories are a good length to read while on the elliptical. So, if I got an e-reader, I could read short stories while exercising.

2. I want to be prepared for the apocalypse. Print seems safer for that. So the really serious keepers probably need to be print. However, there’s nothing to stop me from also having them in electronic form; for example, my copy of the new Lois McMaster Bujold novel, Cryoburn, has a cd in the back with electronic versions of most of her novels, so even though I own them in paper, I could also re-read them on an e-reader.

3. Some books aren’t keepers. I am trying to get better about not keeping books just because I read them. Some books I am unlikely to read again. Those, I try to give/sell/trade away before I become attached simply from having them around for a while. I wouldn’t have to go through the give/sell/trade process if these were e-books, because they wouldn’t be taking up space, and if for some reason I filled up my e-reader (don’t laugh! if anyone could, that would be me!), I could delete them.

The trick is that I don’t always know which books will be keepers. I suppose I could re-buy an e-book as a print book if I really, really wanted it in print.

10 Responses to Print Versus E-Book Smackdown!