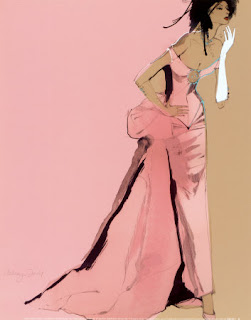 The first romance novels I remember reading in my adolescence, or at least skimming, were Harlequin Presents. Few details stick with me now, but I still remember that getting dressed up was an important part of feminity in those novels. When the heroine was about to go on an outing, her outfit for the occasion would be described in terms like “a casual linen skirt with a trim blouse” or “sleek pumps and a crisp suit, accented with just a touch of lipstick.” So alien!

At that age, I knew nothing about “classic looks,” much less couture, so descriptions like that seemed just as alien to me as the world of jet-setting millionaires portrayed in these books. I parsed the clothing just as I parsed the appearance of alien beings in the science fiction novels I preferred, considering them part of the worldbuilding. Even today, I have a moment of pleased interest every time a heroine walks into an office in something like pleated trousers and a cashmere cardigan, because it signals to me that I’m about to enter a different world.

The illustration for this post is by artist Ashley David.

Victoria Janssen [she, her] currently writes cozy space opera for Kalikoi. The novella series A Place of Refuge begins with Finding Refuge: Telepathic warrior Talia Avi, genius engineer Miki Boudreaux, and augmented soldier Faigin Balfour fought the fascist Federated Colonies for ten years, following the charismatic dissenter Jon Churchill. Then Jon disappeared, Talia was thought dead, and Miki and Faigin struggled to take Jon’s place and stay alive. When the FC is unexpectedly upended, Talia is reunited with her friends and they are given sanctuary on the enigmatic planet Refuge. The trio of former guerillas strive to recover from lifetimes of trauma, build new lives on a planet with endless horizons, and forge tender new connections with each other.
View all posts by Victoria Janssen →
This entry was posted in romance novels. Bookmark the permalink.