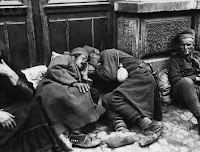 The barrack-square, washed clean with rain,
Shines wet and wintry-grey and cold.
Young Fusiliers, strong-legged and bold,
March and wheel and march again.
The sun looks over the barrack gate,
Warm and white with glaring shine,
To watch the soldiers of the Line
That life has hired to fight with fate.
Fall out: the long parades are done.
Up comes the dark; down goes the sun.
The square is walled with windowed light.
Sleep well, you lusty Fusiliers;
Shut your brave eyes on sense and sight,
And banish from your dreamless ears
The bugle’s dying notes that say,
‘Another night; another day.’
–Siegfried Sassoon, Counter-Attack and Other Poems, 1918