The Faces of World War One

I rarely use photographs to give me character ideas, though occasionally after the story is in progress, or finished, I realize the character looks like a particular person. I do use photographs a lot, though, to both see details of clothing and weapons and to just get a feel for the period, and sometimes for inspiration. I like portraits best. I wonder what the people were thinking, and what their lives were like.

Here are some photographs of real participants in World War One, which I referred to while writing Moonlight Mistress for Harlequin Spice.

Albert Ball, a British flying ace who did not survive the war:

An unnamed Gurkha (Nepalese) soldier, who served in the British Army and has a very nice blade: 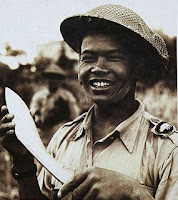 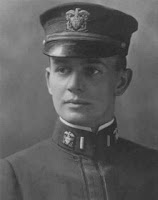 Because of the colonial empires of England, France, and Germany, there were many soldiers from Africa serving on the Western Front, i.e., in the trenches, as well as in Africa itself, and Indian troops were deployed by the British very early on; they, too, served on all fronts.

Here are some Sikh soldiers in France; bicycles were used quite commonly by soldiers: 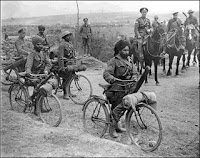 Sar Tinder from Senegal, serving with the French, in one of the color photographs from the period:

Victoria Janssen [she, her] currently writes cozy space opera for Kalikoi. The novella series A Place of Refuge begins with Finding Refuge: Telepathic warrior Talia Avi, genius engineer Miki Boudreaux, and augmented soldier Faigin Balfour fought the fascist Federated Colonies for ten years, following the charismatic dissenter Jon Churchill. Then Jon disappeared, Talia was thought dead, and Miki and Faigin struggled to take Jon’s place and stay alive. When the FC is unexpectedly upended, Talia is reunited with her friends and they are given sanctuary on the enigmatic planet Refuge. The trio of former guerillas strive to recover from lifetimes of trauma, build new lives on a planet with endless horizons, and forge tender new connections with each other.
View all posts by Victoria Janssen →
This entry was posted in images, moonlight mistress, research, wwi. Bookmark the permalink.