I’m working on a proposal that involves an ambulance driver in World War One, and I took notes on this interesting book: Farmcarts to Fords: A History of the Military Ambulance, 1790-1925 by John S. Haller, Jr.

p. 147 “Mobility remained the focus of an efficient ambulance-company service; and the variables of too much weight, proper shoeing of animals, forage, human and animal exhaustion, numbers of motor ambulances and traction motors, employment of civilian vehicles by rental or appropriation, and use of empty field wagons spelled the difference between a medical debacle and a successful evacuation. Statistical averages of the percentages killed (20 percent), those unable to bear transportation (8 percent), those able to be transported in a sitting position (20 percent), those requiring stretchers (12 percent), and those able to walk (40 percent) marked the parameters within which medical strategists did their planning.”

“In retreat…or in offensive operations across no-man’s-land…Men unable to withstand being moved were sometimes left, along with attendants, to fall into the hands of the enemy.” 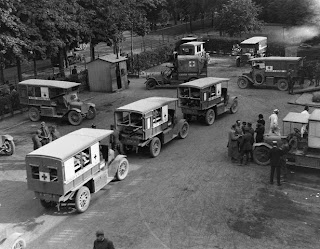 p.148 “The reality of no-man’s-land was that…with opposing armies living in close proximity for extended periods of time, troops often demonstrated a friendly spirit among each other and their wounded. It was not uncommon for battalion stretcher-bearers on both sides to divide no-man’s-land between them, with each side handing over the other’s wounded or informing the other of the position of its wounded to make rescue possible.”

“Following a Turkish counterattack on Pope’s Hill overlooking Anzac Cove in the Dardanelles campaign, hundreds of dead lay in “festering heaps” before the New Zealand and Australian trenches. An armistice granted on May 24, 1915, allowed both sides to bury their dead and collect their wounded. The areas in front of the parapets had become breeding grounds for blowflies and a nauseating source of discomfort to the defenders a few yards away. Wounded who had been lying in the open for three days were infested with maggots. In other areas, where opposing trenches were only a few yards apart, with murderous machine guns trained on the enemy dead to discourage burying parties, sanitary corpsmen resorted to grappling irons flung from the relative safety of trenches to drag the dead and decomposing bodies away for burial.” 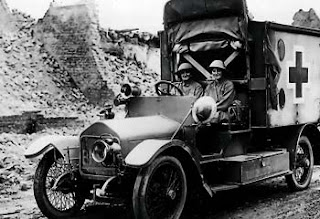 “Following the first day’s battle of the Somme on July 1, 1916, stretcher-bearers needed three days to clear the battle zone of more than fifty-seven thousand dead and wounded officers and men of the British army and nearly six thousand Germans. As many as ten thousand of the first day’s wounded remained in the battle zone the following day, half of whom had not yet been accepted by a medical unit. Even after rescue, however, the wounded continued to suffer hardships. By the time surgeons could attend even minor wounds, the onset of gangrene necessitated lifesaving amputations to circumvent infection.”

p. 150 “The R.A.M.C. stretcher-bearers…were noncombatants, wore the distinctive Red Cross badge, and carried wounded from the regimental aid post to the nearest hospital. These bearers came under considerable shelling and suffered frequent casualties, unlike their predecessors in previous wars.” About 20,000 R.A.M.C. Stretcher-bearers at beginning of war, 150,000 at end. Stretcher-bearers often cleared field of wounded at night under a Red Cross flag. “It was common for stretcher-bearers to remove the white brassards [they wore], which made them easy targets for enemy marksmen.”

p. 155 “In France, good hospital facilities were within a 24-36 hour journey from the firing line.” 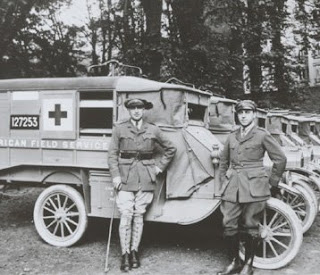 p. 168 The “American ambulance type” was built on a Ford chassis. Started with 4 stretchers, switched to three; over course of war, larger tires added, additional leaf in rear spring added. “lightness, good ground clearance, adequate engine power, and easy movement through mud and fields w/o becoming stuck. Constructed of wood and canvas and designed for economy of space, it became known as a “soapbox body.” Despite its maneuverability, drivers found themselves continually working on some mechanical problem, whether a bent axle, leaky radiator, or worn-out bearings…maneuvered well and could turn on a short radius…Although the Ford was designed for 3 lying or 5 sitting cases, it was not unusual for 7 or 8 wounded to be carried in times of emergency.”

Victoria Janssen [she, her] currently writes cozy space opera for Kalikoi. The novella series A Place of Refuge begins with Finding Refuge: Telepathic warrior Talia Avi, genius engineer Miki Boudreaux, and augmented soldier Faigin Balfour fought the fascist Federated Colonies for ten years, following the charismatic dissenter Jon Churchill. Then Jon disappeared, Talia was thought dead, and Miki and Faigin struggled to take Jon’s place and stay alive. When the FC is unexpectedly upended, Talia is reunited with her friends and they are given sanctuary on the enigmatic planet Refuge. The trio of former guerillas strive to recover from lifetimes of trauma, build new lives on a planet with endless horizons, and forge tender new connections with each other.
View all posts by Victoria Janssen →
This entry was posted in research, wwi and tagged ambulance. Bookmark the permalink.