The historical narrative in this documentary series is much simplified compared to most books on WWI I’ve read, and also the episodes are by topic rather than strictly chronological; so, watching this, it helps to already know what events were all happening at the same time. They don’t give you a timeline. The show focuses on Big Names of History, or people who will become Even Bigger Names later on, like Herbert Hoover and Winston Churchill, as well as on major battles. There was little to no information about the various home fronts, which is fine since I’ve researched that very heavily. The very best thing about this series is that both sides are shown and described in equally neutral language and with almost equal depth. 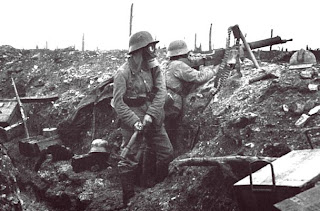 However, I wanted this series for the film footage, and that I got in spades. It’s not as organized as I would like. There are some shots they reuse whenever called for, for example a shot of shells exploding. Generalized footage of soldiers on the march, etc., was used where it made sense in the episode, not where/when it might actually have been filmed. But I don’t mind so much; I wanted the look of the thing. Somehow, photographs give you something words, even primary source words, can’t, and film footage even more so. You can see faces, and you can see their expressions change. You can see their body language. Sometimes, in watching the people, I barely hear the narration. 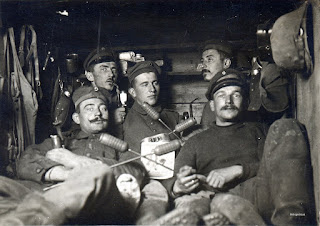 One interesting thing that I learned was how closely all the royal families of Europe were related at that time. It’s one thing to know that, another entirely to have it laid out that Kaiser Wilhelm II was Queen Victoria’s oldest grandson and cousin to both King George V of England and Czar Nicholas II of Russia.

The footage of the documentary is in black and white, and sometimes shaky. Watching on my small television, my eyes grow tired after a while. Sometimes it’s difficult to watch, when thinking of nameless soldiers seen in closeup, “I wonder how he died? Or if he survived the war?” That, too, is why I think watching this is very useful as research. Not for the facts it gives me, but for the speculations it engenders.

Tune in tomorrow for a guest post by Morag McKendrick Pippin about researching and writing romance set during World War Two.

The Faces of WWI.

Victoria Janssen [she, her] currently writes cozy space opera for Kalikoi. The novella series A Place of Refuge begins with Finding Refuge: Telepathic warrior Talia Avi, genius engineer Miki Boudreaux, and augmented soldier Faigin Balfour fought the fascist Federated Colonies for ten years, following the charismatic dissenter Jon Churchill. Then Jon disappeared, Talia was thought dead, and Miki and Faigin struggled to take Jon’s place and stay alive. When the FC is unexpectedly upended, Talia is reunited with her friends and they are given sanctuary on the enigmatic planet Refuge. The trio of former guerillas strive to recover from lifetimes of trauma, build new lives on a planet with endless horizons, and forge tender new connections with each other.
View all posts by Victoria Janssen →
This entry was posted in research, silent film, wwi. Bookmark the permalink.