Nifty Women Who Fought in World War One

Along the lines of “Nifty Stuff That Ought to be in Romance Novels,” there are some famous women in World War One that would be fabulous sources for heroines. 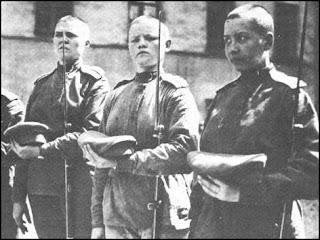 I highly recommend Into the Breach: American Women Overseas in World War I

if you’d like a good overview of the many non-combat roles women played in Europe during World War One. The book focuses on Americans, but I still think it’s a good starting point for general research, as it’s very readable and has an excellent bibliography.

Beginning in May of 1917, the Russian army had a battalion exclusively made up of women, commanded by Maria Bochkareva. About three hundred of the women were in combat; Bochkareva was wounded in the June Offensive.

Here’s another great book that focuses on military women: The First, the Few, the Forgotten: Navy and Marine Corps Women in World War I 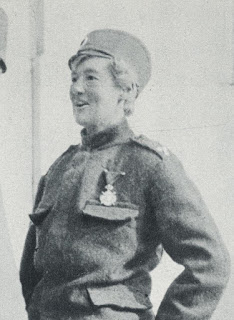 There’s a good Wikipedia page on Flora Sandes, a British woman who served with the Serbian army after becoming separated from her Red Cross ambulance unit, and was wounded by a grenade.

Hello Girls operated switchboards, often near the Front or under other dangerous conditions. Here’s more. They were finally granted the status of veterans in 1978, though not retroactively, meaning they did not receive benefits for the period when they were denied. Here’s another Hello Girl page.

Read more about women at the front.

Victoria Janssen [she, her] currently writes cozy space opera for Kalikoi. The novella series A Place of Refuge begins with Finding Refuge: Telepathic warrior Talia Avi, genius engineer Miki Boudreaux, and augmented soldier Faigin Balfour fought the fascist Federated Colonies for ten years, following the charismatic dissenter Jon Churchill. Then Jon disappeared, Talia was thought dead, and Miki and Faigin struggled to take Jon’s place and stay alive. When the FC is unexpectedly upended, Talia is reunited with her friends and they are given sanctuary on the enigmatic planet Refuge. The trio of former guerillas strive to recover from lifetimes of trauma, build new lives on a planet with endless horizons, and forge tender new connections with each other.
View all posts by Victoria Janssen →
This entry was posted in research, women, wwi. Bookmark the permalink.