Werewolves in WWI? Why Not?

This post was written for Harlequin’s Paranormal Romance Blog.

For The Moonlight Mistress, I combined a historical novel with paranormal elements. As you probably know already if you read this blog regularly, the book is set during the early days of World War One, and begins with a romance between Lucilla, an English chemist and nurse, and Pascal, a French scientist. They’re trapped in Germany when war is declared and must escape together. 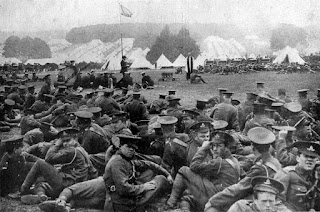 I could have gone from there to write a straightforward wartime adventure novel, but instead I established that Pascal is only in Germany because he’s investigating rumors of a werewolf held captive by an amoral scientist. Soon, two werewolf characters are introduced, one a soldier and the other a spy, and their role in the war and their relationship is woven into the novel’s main plot.

For example, the plot of a historical romance might be: hero and heroine meet, family/money/status/scandalous past/amnesia keep them apart, then they must resolve their issues to be brought together romantically. For me, those plot complications and their resolutions become more compelling if the family issue is that a werewolf needs to marry another werewolf or she can’t have werewolf children, or if the scandalous past results from the heroine not being human and not having human standards of behavior. Not knowing what to expect makes the journey more fun.

I’ve been asked, more than once, why World War One? Why werewolves?

I’m fascinated by World War One and the period immediately before and after. It might be because I grew up reading Dorothy Sayers’ Peter Wimsey mysteries, or might be because my school history classes rarely spent much time on those decades, and that made me more curious rather than less. Regardless, I have several shelves of reference books on the period and love to read about it even when I’m not writing it. Also, I rarely find fiction, especially romance, set during World War One. If I want some, I have to write it myself. So I did!

For me, World War One is a period when large parts of the world underwent a major change. One of the themes of that change, in my opinion, is technology and the way humans relate to it. In that war, technology was used for violence: massive artillery, airplanes, tanks, poison gas. Humans used technology to kill each other in mass numbers.

I chose werewolves as my paranormal element because werewolves are often used, thematically, to symbolize or represent nature and the vital life force of wild creatures. Wolves are hunters, killing to eat; humans at war are killing for reasons distant from immediate survival. For that reason, I felt werewolves were a good contrast to the technology theme. 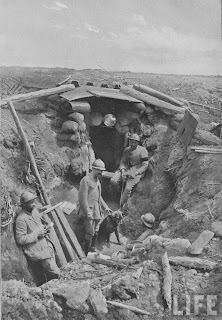 In particular, my werewolves are rare and growing more so. What happens when nature suffers at the hands of technology? What happens when a scientist tries to bend nature to his will, in order to gain power over other people? How do the goals of the humans and the werewolves come into conflict? I enjoyed these questions so much that I would like to write another novel with the same themes one day.

Also? Werewolves are sexy. There’s something about all that animal energy that makes them appealing – think Wolverine in the X-Men comics – he’s not a werewolf, but he has a similar appeal. I wanted my characters to have some of that energy, and at the same time to be more like people to whom I’d be drawn in real life.

One of the things I love most about real-world wolves is that they are playful. They play with each other, and they will even play with other species, such as crows. I included that element by having my male werewolf be a bit of a joker. The female werewolf is much more serious because of her past experiences, but that aspect of play is one of the things that most attracts her to her future partner. I incorporated verbal banter into most of their dialogue and of course into their sex scene, which takes place in human form. For them, being able to talk to each other is an added level of intimacy. When one of them is in human form and the other in wolf form, play is still an element of their relationship; one teases the other.

As a way of making the werewolf characters less like ordinary humans, I used their senses of smell. Scent affects their perceptions and feelings, including their relationship with each other. When they meet, they can immediately tell that they are both werewolves, and that affects the ways in which they interact. They’re human, but they’re also something more.

Finally, werewolves are an important element of the genre-mixing I mentioned back at the beginning of this post. They’re the unexpected element. A novel about World War One has lots of available conflict for the characters. Any reader can predict what might happen to a group of characters who go off to war. So why not add werewolves, and see what happens?

Victoria Janssen [she, her] currently writes cozy space opera for Kalikoi. The novella series A Place of Refuge begins with Finding Refuge: Telepathic warrior Talia Avi, genius engineer Miki Boudreaux, and augmented soldier Faigin Balfour fought the fascist Federated Colonies for ten years, following the charismatic dissenter Jon Churchill. Then Jon disappeared, Talia was thought dead, and Miki and Faigin struggled to take Jon’s place and stay alive. When the FC is unexpectedly upended, Talia is reunited with her friends and they are given sanctuary on the enigmatic planet Refuge. The trio of former guerillas strive to recover from lifetimes of trauma, build new lives on a planet with endless horizons, and forge tender new connections with each other.
View all posts by Victoria Janssen →
This entry was posted in historical fiction, moonlight mistress, werewolves, writing, writing craft. Bookmark the permalink.