I had another thought about Western romances.

Does the reason the “mail-order bride” plot is so popular in Western romances have anything to do with the idea that marriage is linked to civilization? In that case, marriage could be civilization, and imposing it upon two people can be likened to imposing a farm onto a wilderness, or law upon a den of outlaws. 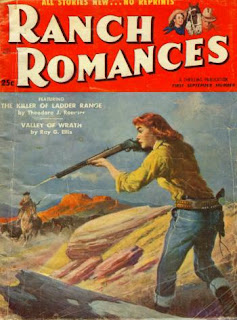 True, the mail-order bride isn’t usually forced legally to marry, but she often takes that action under force of circumstances. Circumstances, interestingly, that usually arise in the East, supposedly a place of “civilization.”

Is there a subtle commentary going on here, that the “civilized” world isn’t, and that the new, improved civilization is the looser, freer world of the frontier? A commentary also, perhaps, on the European historical, particularly the rigid Regency or Victorian, versus the “new” world of America?

I am probably reading way too much into this.

Victoria Janssen [she, her] currently writes cozy space opera for Kalikoi. The novella series A Place of Refuge begins with Finding Refuge: Telepathic warrior Talia Avi, genius engineer Miki Boudreaux, and augmented soldier Faigin Balfour fought the fascist Federated Colonies for ten years, following the charismatic dissenter Jon Churchill. Then Jon disappeared, Talia was thought dead, and Miki and Faigin struggled to take Jon’s place and stay alive. When the FC is unexpectedly upended, Talia is reunited with her friends and they are given sanctuary on the enigmatic planet Refuge. The trio of former guerillas strive to recover from lifetimes of trauma, build new lives on a planet with endless horizons, and forge tender new connections with each other.
View all posts by Victoria Janssen →
This entry was posted in genre, romance novels, western. Bookmark the permalink.

4 Responses to Pondering the Mail-Order Bride