The 5th Seaforth Highlanders in the trenches

From The Great War Diaries of John Bruce Cairnie of the 5th Seaforth Highlanders, 1915, transcribed by James Bruce.

A fine morning. Had to wait on after stand-to (3 a.m.) in case the Briggie comes along. Shaved, breakfasted and to bed. The redoubts were shelled while I slept and one high explosive landed just behind the parados beside the bomb supply. Fortunately they didn’t explode. The can get a perfect enfilade on the redoubts so we are going to strengthen the traverses. I went up in the forenoon and underwent the next part of the bombardment which was not so trying as I expected. However the shells weren’t coming within 50 yards but the splints sang and hummed overhead. I got one wee bit on the leg but only a scratch. It is shrapnel that plays the mischief as regards splinters. 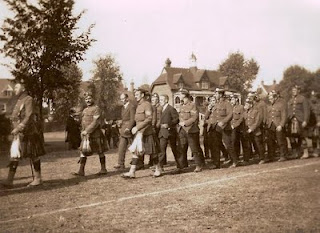 At night again the fun started but Y got it worst. I don’t know how they hadn’t some casualties. Fortunately a lot of the shells didn’t explode – duds. Later the Bosches started rapid fire, having spotted a work party of Argyles so we had a hot time, the bullets going cracking overhead. I wasn’t excited, but it took some nerve to put my head above the parapet. The Argyles who were with us were a great asset. Donnie Morrison is a very useful and willing man. I’m glad to have him.

Stayed in Z Redoubt until after seven a.m. when I came down to HQ and got shaved. It was a pretty quiet day as far as the redoubts were concerned although they have been searching again for the sap head. In the afternoon there was fairly heavy bombardment of the rest of the line but no damage was done. Finlayson took over the redoubts at 8:30 p.m. and I moved my platoon down to the parapet opposite HQ. Am now fine and near the dug-out and more in the centre of things. Turned in at 11:30 p.m. so as to be able to relieve Finlayson at 3 a.m. I hear there was pretty heavy firing after I went to bed but never a thing did I hear.

Finlayson called me at 3 a.m. but as things were quiet I didn’t get up till after 4. Went round the redoubts, shaved and had breakfast. Pte W Reid of my platoon was shot through the side while working behind the parapet. He died shortly afterwards. We thought at first it might have been an accident by a couple of Argyle snipers behind, but as another two bullets have come into same spot, I am pretty sure it is a German sniper. We hunted round behind for him unsuccessfully, but they are devilishly cunning.

Slept in the afternoon, censored some letters and went along the line to see Addie. I never feel as sad as when I see poor old Addie’s face. I believe ‘C’ would put up a desperate fight but their spirit is clean gone at present.

Went out on reconnoitring patrol about 11 a.m. with Sgt J. Fraser and a man. Were out for at least an hour and a half but didn’t see or hear anything. I was quite nervous and ‘chattery’ before going out but soon settled down once I was there. We got out a good bit. Went to bed at 1:20 a.m. The Germans have been sending over some big shells today and trench mortars. They are getting onto our new communication trench.

Wakened by Finlayson at 3 a.m. All quiet. Some trench mortars came over about breakfast time but did no damage. Lay in a ruined cottage for a couple of hours with my corporal to see if that sniper would come out, but no luck. Shells began to come over so we had to shift. Went out with Finnie and C. Serg. Major Miller and got some shell fuses belonging behind the lines.

Were relieved at 9:30 by incoming Brigade. Nasty jamb getting men in as they had far more than us. If the Germans had sent over some well aimed trench mortars they would have done tremendous execution but they were unaccountably quiet and probably being relieved themselves. Got down to the far end of Laventie without mishap although one bullet made the skin of my back creep. The men got tea and were led to their billets. Then we got to ours and had a grand supper with fried eggs, etc. in the Café Aux Voyageurs. Turned in at 1 p.m.

Breakfast about 8 a.m. – ham and eggs, sausages, tea, etc quite a good affair, with Steven D in attendance. Company parade at 11 a.m. for inspection by C.O. – rifles, bayonets, shaving, etc. The Colonel was unconsciously particular, as if men carried burnishers in their kit. Slept in the afternoon and wandered down town in the evening with little Willie. Rather colder today. A few shells falling not far away, watched apathetically by the remaining inhabitants from their door-steps.