The 2008 adaptation of Persuasion

is good so far as it goes, but it doesn’t go very far. 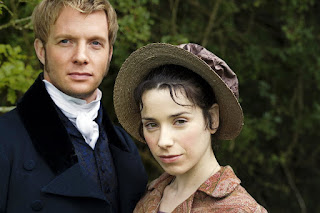 Though the acting is excellent, and the settings very historical and scenic, it felt like the postcard version of the novel. It’s only ninety minutes long, which explains a lot. The adaptation focuses on the romance between Anne and Frederick and the rest of the characters fade into shallow background, a point emphasized by the sometimes off-kilter closeups and fast tracking shots that make the world outside of Anne slightly unreal. There are a few necessary scenes of Frederick without her, but only when utterly needed. This adaptation is definitely about Anne’s romantic relationship, not a full picture of how Anne was constrained by her particular time and society and family and how she at last found love within those boundaries.

For that reason, the secondary characters mostly seem a bit cartoonish. True, her father in the novel is a bit cartoonish, but not quite this much. I felt a lot of the warmth and reality of Admiral and Mrs. Croft, for example, was lost in this version. The scene of Louisa Musgrove’s accident, in this version, made me snort because it seemed so fake and unlikely; the camera quickly went, again, to Anne and Frederick, who were much more real. All the feeling in that scene came from their faces and posture.

The final revelations were portrayed in a way that was distinctly odd. I call it “Jane Austen cardio workout.” Anne ends up running all over Bath before finding Frederick, with Mrs. Smith briefly running in and then out again with her revelations about Anne’s cousin. I was boggled with this choice and found it amusing rather than tense.

Like the previous movie version (from 1995), this one was determined to have an outdoor kiss between Anne and Frederick. Okay. I can deal with that. It’s a movie. Visuals are needed. The final scene in the 2008 version also had Frederick wearing only a shirt and waistcoat. Outside. For a carriage ride in an open carriage. He looked great, but I kept thinking, if they were being really historical, without a coat wouldn’t he be practically naked? Was this an homage to the famous “wet shirt” scene from the 1996 Pride and Prejudice 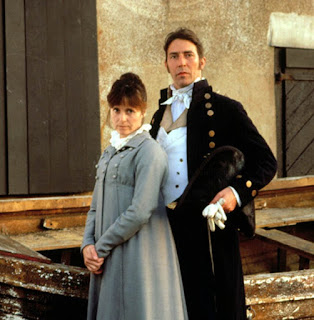 All that said, I enjoyed the production and thought Sally Hawkins was excellent in the lead role, particularly in a scene in which she is trying to weep silently. Rupert Penry-Jones was also quite good; though he had less to do, he did it very well without overdoing it.

If all you know of Persuasion is this adaptation, do yourself a favor and go a little deeper with the novel or with the 1995 adaptation

with Amanda Root and Ciarán Hinds, which I still prefer.

Has anyone seen the 1971 mini-series adaptation? What did you think?

Victoria Janssen [she, her] currently writes cozy space opera for Kalikoi. The novella series A Place of Refuge begins with Finding Refuge: Telepathic warrior Talia Avi, genius engineer Miki Boudreaux, and augmented soldier Faigin Balfour fought the fascist Federated Colonies for ten years, following the charismatic dissenter Jon Churchill. Then Jon disappeared, Talia was thought dead, and Miki and Faigin struggled to take Jon’s place and stay alive. When the FC is unexpectedly upended, Talia is reunited with her friends and they are given sanctuary on the enigmatic planet Refuge. The trio of former guerillas strive to recover from lifetimes of trauma, build new lives on a planet with endless horizons, and forge tender new connections with each other.
View all posts by Victoria Janssen →
This entry was posted in austen, movies. Bookmark the permalink.