Dorothy Sayers’ Murder Must Advertise was adapted for television in 1973 with Ian Carmichael as Peter Wimsey. Other notables guesting were Peter Bowles as Major Milligan, Fiona Walker as Miss Meteyard, John Hallam as Ingleby, Christopher Timothy as Willis, and Paul Darrow as Tallboy. Mark Eden and Rachel Herbert are wonderful as Charles and Mary Parker (i.e., Peter’s sister, nicknamed Polly). I liked the affection in the scenes between Peter, his sister, and his brother-in-law. 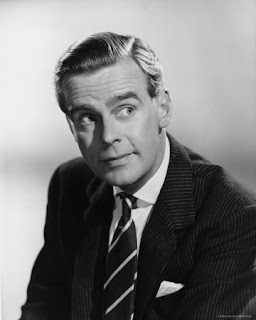 I pulled out my copy of the book while watching parts three and four, and was able to follow right along. A lot of the dialogue was reproduced verbatim, though occasionally lines were assigned to different speakers. For example, in the book Peter has a long speech, and in the tv version Peter begins his speech, then Charles takes a couple of lines of it, then back to Peter, which is more fair to the actors, and more interesting to watch. All in all, I like the adaptation very much, despite my belief that Carmichael is too old for the role, and not the right physique (they put a belt on the Harlequin costume, and a cape, to make it a bit more concealing). Age aside, he’s wonderful with the “silly ass” who morphs into the detective, who’s not so silly at all.

I love the whole plotline of the detective playing one role as an “ordinary” person working in an advertising agency, plus another role as a mysterious swain to a possible villain, plus having to find time for himself and his own life, and seeing how all these overlap.

Some minor characters were trimmed or their roles doubled by others, but not to the story’s detriment. Charles and Peter took the place of two policemen at one point, and Peter is the one who sees someone fall under a train (and the additional person who fell under the train doesn’t appear at all). Peterkin, alas, does not appear, I think because the BBC avoided using child actors whenever possible, but his voice is heard offscreen, so the “Tears, idle tears” line is pretty much intact. The only thing lost is one small, adorable scene with Peter and Peterkin and his “naeroplane.”

Two other cuts were the Whifflets campaign, which is reduced to one mention in passing (as if it happened, but offscreen) and the cricket match. I can see how the Beeb didn’t want to shell out for a location shoot with a full cricket match and a lot of extras. Instead, Charles arrests “Mr. Bredon” at Pym’s.

I truly, truly loved the scene in which Peter tells Mr. Tallboy to walk home and not look behind him. In the book, he has a line after Tallboy leaves, about “the place of execution.” In the adaptation, it’s visceral. The door closes; Peter turns slightly away from the camera, then clutches convulsively at the mantel. He turns his back to the camera and crumples. Wow.

When Charles arrives to tell him all the doperunners have been caught, Peter drops his glass of (alcohol, presumably) and it shatters. Charles is talking about how they got them all. Peter walks quickly over to the drinks tray, quickly pours himself a drink, downs it quickly. His end line about “don’t feel much like celebrating” is the same as in the book. Wow again.