Underclothes in World War One

Cunningham, C. Willett and Phillis. The History of Underclothes

p. 142 for men: united garments cover to the wrists and the ankles. Pants reach to ankle, drawers to knees. Vests are undershirts, with either long or short sleeves. Nightshirts were long. Pajamas were made of flannel or silk. 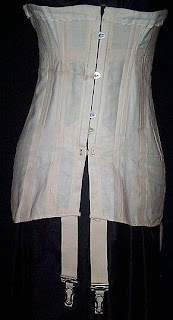 p. 144 corsets: “by the end of the [war] it started only a couple of inches above the waist and stretched well down over the thighs.” “At the same time the waist became less constricted and boning much lighter.”

p. 146 petticoats: by 1918 long with straight-hanging flounce (just above ankle), made of white cambric. The word brassiere first appeared in U.S. Vogue in 1907. (bra came into use much later.) Camisoles were still in use.

p. 147 knickers or drawers: “French” knickers were wide with frilly legs. “Directoire” knickers, or culottes, fastened with elastic or bands at knee and waist, fit more closely, and had removable cotton linings.

“Combinations were of longcloth, cambric, nainsook, etc., with wide frilled legs, embroidered or decorated with lace, ribbons, or insertions. They were close fitting in wool, silk, and mixture, plain or ribbed knit.”

p. 148 women’s sleepwear: nightgowns had square necks more often than round; they became less bulky due to wartime shortages “with low necks and short sleeves, or to be quite sleeveless” and more plain. Pajamas in the style of men’s began to pick up during WWI.