Even if you don’t have a library of World War One books, there are a number of useful websites that provide information about uniforms in that era. Here are some of the ones I’ve found useful.

The Sutlers Stores produces replica uniforms for museum display and docent use. Note the “grayback” shirt which I mentioned in The Moonlight Mistress. 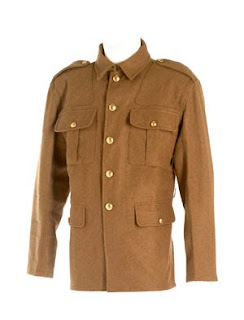 Reenactor.net has a WWI section. It’s not only useful for the information it provides, but as a gateway to making research contacts, if you should want to know what it’s like to wear the uniforms. I love their Morsels of Authenticity, short articles about small details, like German underwear.

I continue to recommend Osprey Publishing, particularly the “Men at Arms” series books, which feature detailed drawings of uniforms and equipment for a wide range of armies and time periods.

Digger History provides a long list of uniform photos and drawings from World War One and other periods, from all over the world. For example, infantry puttees.

For more idea-sparking material, you can search on WWI at Old Magazine Articles, if you’re willing to spend a little time reading. For example, this Vanity Fair article on American uniforms for the well-dressed, October 1918. Their home page.

Victoria Janssen [she, her] currently writes cozy space opera for Kalikoi. The novella series A Place of Refuge begins with Finding Refuge: Telepathic warrior Talia Avi, genius engineer Miki Boudreaux, and augmented soldier Faigin Balfour fought the fascist Federated Colonies for ten years, following the charismatic dissenter Jon Churchill. Then Jon disappeared, Talia was thought dead, and Miki and Faigin struggled to take Jon’s place and stay alive. When the FC is unexpectedly upended, Talia is reunited with her friends and they are given sanctuary on the enigmatic planet Refuge. The trio of former guerillas strive to recover from lifetimes of trauma, build new lives on a planet with endless horizons, and forge tender new connections with each other.
View all posts by Victoria Janssen →
This entry was posted in links, research, wwi. Bookmark the permalink.