The May/December romance is one thing. The May/Ten Centuries Back romance is quite another.

It’s always disturbed me a little that vampire heroes in romance are so often much older than their heroines. When the heroine is not only not immortal but young for a human, it’s even harder to convince me that they could have anything in common. Perhaps that’s why writers sometimes rely on strong sexual attraction between the two (sometimes natural, sometimes superntural or “fated”), or on plot reasons that require the two characters to be together, such as only she has the necessary scientific/psychic/genetic abilities to save the world and is thus forced to tie herself to an ancient vampire who thinks swing music is “dynamite.” 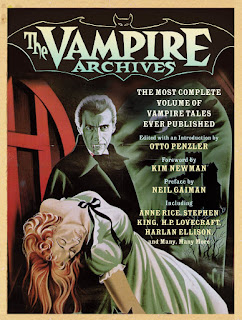 There are advantages to the forced relationship; for one thing, it automatically introduces tension into both the relationship and the plot.

It’s the innocent heroine/jaded vampire who instantly fall in love, no questions asked, who, to me, fail the possibilities. They’re not doomed to fail; but to me they do fail because it’s very, very rare that the writer actually shows me why they like each other and why they belong together. Isn’t the whole point of a romance to see the romance developing? To watch the hero and heroine overcome their differences?

True, it’s very difficult to imagine what centuries or millennia of experience can do to a person, but it’s our job as writers to do that imagining. At the least, we can look at relationships in real life where one partner is much older than the other, and see what we can learn from that and apply to our writing.

Or just once, I’d like to see a vampire romance hero fall for a woman who’s at least in her fifties or sixties. Or how about a futuristic human who’s two hundred years old?

Victoria Janssen [she, her] currently writes cozy space opera for Kalikoi. The novella series A Place of Refuge begins with Finding Refuge: Telepathic warrior Talia Avi, genius engineer Miki Boudreaux, and augmented soldier Faigin Balfour fought the fascist Federated Colonies for ten years, following the charismatic dissenter Jon Churchill. Then Jon disappeared, Talia was thought dead, and Miki and Faigin struggled to take Jon’s place and stay alive. When the FC is unexpectedly upended, Talia is reunited with her friends and they are given sanctuary on the enigmatic planet Refuge. The trio of former guerillas strive to recover from lifetimes of trauma, build new lives on a planet with endless horizons, and forge tender new connections with each other.
View all posts by Victoria Janssen →
This entry was posted in reading, vampires, writing craft. Bookmark the permalink.