At last, my report on the 2010 Romance Writers of America Annual Conference! Scroll down or click the “RWA” tag for more posts and lots of photos. That picture on the left is one of the pretty floor mosaics at the Orlando Airport. 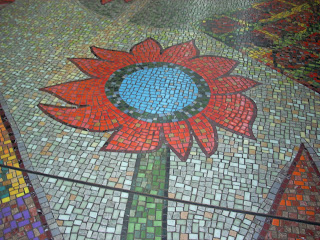 I arrived Wednesday afternoon. I unfortunately had woken up way too early so was a bit punchy that whole day. My travel, though, was fine; the plane was about an hour late leaving, yet arrived close to the original arrival time. Perhaps there was a TARDIS involved? The van I took from the airport to the Dolphin Hotel was completely full of RWA Conference attendees, with the exception of one male business traveler who was going to the Hilton. We almost talked him into going to the conference with us instead.

I spent the rest of Wednesday with the mundanities of checking in, registering, unpacking, etc. before the Literacy Autographing, which is a fun but exhausting event. I then ventured out to the Blogger Bar Bash and met…lots and lots of cool people. I have a pile of business cards. Let’s see, there was Anime June of Gossamer Obsessions, and KristieJ of Ramblings on Romance, and Librarian of the Year Jennifer Lohmann, and Magdalen B of Promantica, and of course host Wendy the Super Librarian. And many more. I was so tired I wasn’t very entertaining, though. Instead of going on to the Romance Divas Karaoke gathering as I’d planned, I went to sleep instead. That was the right choice. 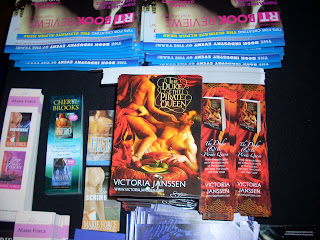 Thursday morning, thanks to the suggestion of rommate Sarah Frantz, I got room service. It was an unspeakable luxury not to have to hunt around for food, since I hadn’t quite mastered the hotel’s geography yet. However, I felt about a thousand times better than I had the night before, so everything made much more sense! I dropped off my postcards and bookmarks at the Goody Room and picked up various goodies for a Romance Diva friend who collects such things. I also visited the bookmarks of friends Kate Pearce and Jeannie Lin and snabbled a couple for my own use, even though I’d already pre-ordered their books.

Before lunch, I hung out in the lobby for a while with fellow Romance Divas, briefly interrupted by chats with my editor, who was passing by, and with Lucienne Diver, whom I hadn’t seen on Wednesday. I really enjoyed Nora Roberts’ keynote speech, and had a nice chat at the luncheon with Robin Rotham. 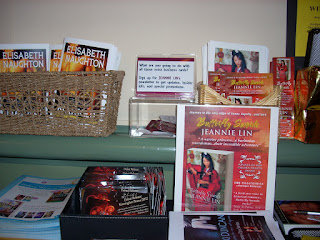 I worked out at the hotel’s health club on Thursday afternoon, then that evening was the party for my online RWA chapter, Passionate Ink. Writer Angela Knight and scholar Sarah Frantz spoke most entertainingly, and I ate a lot of cheese. Soon after, I discovered my voicemail on my cell phone was wonky, so I dragged Ella Drake with me to fix it, because being without voicemail at a conference spells disaster.

I skipped dinner (remember all the cheese?) and then put on my pink pajamas and black satin robe to attend eHarlequin’s annual Pajama Party. I was one of the first folks there, so got some interesting looks as I trekked through the crowded hotel lobby, along with a couple of “Pajama party?” queries. At the party, I holed up in a corner with roomie Elaine Golden and fellow writers Ella Drake, Leia Rice, Janet Mullany, and several others who wafted in and out, catching Amanda Berry and Jeannie Lin towards the end.

And so, dear reader, to bed.